Recently been to Pallant House in Chichester to see the wonderful Burra show there. He is getting a great deal of well-deserved attention now and this show will have done his reputation no harm. There were plenty of pictures from each of his well-known painting phases. There was also an interesting film running of him being interviewed at some time late in his life. He was, shall we say, an unprepossessing sight by then, with long dark hair and living in what might be said to have been squalor. In his kitchen he was shown preparing sausages; he poured himself what appeared to be a neat whisky, emptied one bottle into his glass and topped it up with another already opened bottle from the table, commenting archly to the camera something like “There, that’ll make a good impression!” 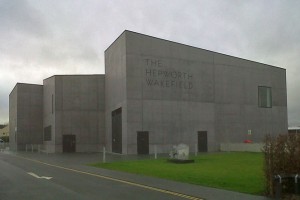 In the rest of Pallant House were 2 large Michael Andrews’ canvases. He is ripe for a major exhibition. I vividly recall seeing a show of his, I think at the Hayward Gallery, in the 1980’s and trying unsuccessfully to buy a picture afterwards from his dealer.

Yesterday to Wakefield to the new Hepworth Gallery. Very bleak outside on a grey day, but very splendid inside. A thoroughly fascinating display; a good comparison with FE McWilliam in Northern Ireland, in terms of showing the working conditions of a 20th C British sculptor (not to mention Perry Green and Paolozzi’s studio recreation in the Dean Gallery).