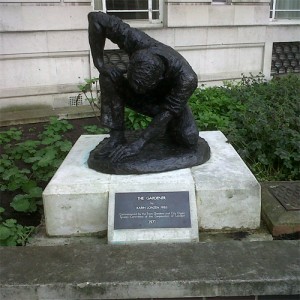 On London Wall, outside the Brewers’ Hall, I came across today a sculpture of a gardener by Karin Jonzen. It dates from 1971 and a plaque says it was commissioned by the Trees, Gardens and City Open Spaces Committee of the Corporation of London. The gardener, presumably in bronze, bends down to tend to his garden. The angular form gets its effect from the awkward shape his straining body makes; the face is invisible.

There is a delightful obituary of Karin Jonzen on the internet, written by Edward Lucie-Smith for the Independent on 2 February, 1998. She had recently died in London aged 83 after a colourful life. According to this, her career was in the doldrums in the early 1970’s. It would be interesting to see who was on that City Committee at the time; its membership would probably reveal why she got the commission.