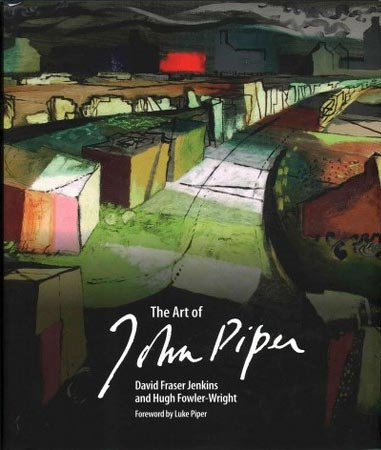 Writing about the entirety of John Piper’s career presents a formidable challenge. It lasted a long time and encompassed a great variety of types of work. Describing it requires a very fine balance between detail and overview. The authors here on the whole make a good job of getting that balance right. A degree of exhaustion sets in for the reader as one new development follows another and has to be described, but it is hard to see how they could have entirely avoided this problem; overall the delicate, quirky nature of the writing keeps one going. The authors have a tendency to use curious turns of phrase, which is refreshingly eccentric; it also has the huge benefit of not in any way resembling the style employed by art historians trained in a different school; there are no words like “tropes” in this book.

Perhaps artists (or lucky artists) attract the authors they deserve; those who are most in sympathy with their aims and ambitions. It could be said that there was something apparently both quirky and straightforward about Piper’s style, but it is easy to fall into a dangerous underestimation of this artist. Artists who live as long as Piper did (from 1903-1992) may find their career characterised by their later work: it is what sticks in the mind of those writing about them or remembering them after their death. The problem with this is that an artist’s later work may not be his best and may not be representative of his output. This certainly seems to be an issue for Piper’s reputation, at least in the popular, non-academic mind. In the casual milieu in which artists jostle for one’s attention and have to be crudely bracketed in some category or other, the terms Neo-Romantic, architectural and churches might be some of the first that come to mind when thinking of Piper’s work. If the judgment stops there, it is deeply unfair to this most prodigious of talents.

Just as the authors write like normal people, it is best to approach Piper’s achievements from a non-technical starting point. If he has to be compared to Picasso or to Francis Bacon, he will suffer by comparison. Accordingly, many critics of 20th century British art have sniffed at him; the representation of churches and things associated with churches in a non-ironic manner has been a sure way to offend the modernist’s sensibilities. The fact that he had a period in the 1930s when his work was abstract merely, to their minds, serves to illustrate what a shame it was that an artist who might have been able to turn into, say, Ben Nicholson, in fact failed to see the light and returned to the shades of representational darkness.

In fact, we have surely now escaped from that method of interpreting the mid-20th century British art world? Now we can allow ourselves the freedom to observe all sorts of individualistic artists and accord them due respect for their achievements, without judging them against some artificial canon. Piper was just such an individual. So was Edward Burra, Cecil Collins, David Jones, Stanley Spencer, Lowry, Paul Nash, take your pick. They cannot be judged against a group style or against external rules set by the tenets of Cubism or Surrealism or Picasso’s latest adventures; only on their own merits. In Piper’s case, my own assessment is that he was an exceptionally gifted and interesting artist, worrying away at the technical challenges presented to him by the commissions he received in theatres, opera houses and churches (for stained glass in the latter case); and developing his own independent forms of art whenever he had the opportunity. He experimented endlessly and fruitfully. In many ways, the pure abstract art which he produced during the 1930s, which finds favour with some critics, was one of his weaker moments, in the sense that it was plainly derivative. He nevertheless used abstract elements throughout his career and many of his landscapes in later years were only saved from complete abstraction by their use of titles suggesting they originated in views of places.

It is very difficult to know how, in any practical way capable of being published, Piper’s career could be covered any better than it is in this book. It is beautifully produced, well-illustrated (and written) and makes the best possible introduction to Piper’s work. If he had to be tackled in greater detail, multiple volumes would be required. His life has already been covered at length in a biography by Frances Spalding and Fraser Jenkins has previously produced exhibition catalogues dealing with aspects of Piper’s world; the feeling is that this book represents the summation of many years of learning about Piper’s work.

How would one apply a reasonable, but critical, look at the work in a few sentences? With great difficulty, is the short answer. Piper thrived in a world which can be characterised by some people whose names carry their own freight: John Betjeman, Richard Ingrams and Osbert Lancaster spring to mind. Some would regard them as suitable antidotes to the tiresomeness of the modern art world; others could regard them as eccentrics, out of time with the passage of artistic progress, if such a thing exists. Piper, whilst sharing some of their interests and characteristics, went beyond them in any event; he was a great experimenter, not a comfortable old fogey in slippers and pipe painting churches. He kept on experimenting right to the end, even though at some point in his long career he ceased to be regarded by the art establishment as an important modern artist and became a curiosity. He had the problem of trying to make enough money to live on, and this may have distorted the purity of his artistic leanings quite severely over the years, as more and more commissions accumulated and crowded out the time available to him to pursue his own interests. In addition, the need to produce set designs, and his aptitude at doing them, rather coloured some of his own work, which had a tendency towards stylisation.

One of the things which is difficult to get to grips with in a book of this type is the nature of Piper’s religious beliefs. He took the mature decision at the age of about 36 to be confirmed as a member of the Church of England. This in itself was an interesting choice. Many of his contemporaries (Evelyn Waugh, Graham Greene, Sir John Rothenstein) who had religious beliefs unsatisfied by the Established Church of their birth chose to become Roman Catholics; a deliberate choice of Anglicanism says something about Piper’s mind. The fact that he also painted a very large number of churches, ruined or otherwise, also suggests that he did not simply see a church as an interesting building. His religion was perhaps closest to that of TS Eliot in Four Quartets, mixing religious beliefs with traditional notions of the church as a State church.

For all the apparent uniqueness of his style, I feel he understood what other artists were doing and took from them what he found interesting or relevant to his own vision. He did not operate in a bubble. At one point, for example, he seems to have noted what de Staël was doing in France and taken it into account in his own work. The result of all his learning and experiments was unique and special. The book is a triumph. Surely now Piper has been laid to rest. Nothing more which is going to add substantively to our understanding of his status needs to be said about him. His art as a whole needs no more exploring or elucidating. Let him on the basis of this book take his place in the pantheon of 20th century British artists who merit our respectful attention.